Be the first to review this product
As low as £699.00 Regular Price £829.00
In stock
SKU
duotone-slick
Details

The Duotone Slick is designed around the Mini Boom concept, this offers some unique advantages over other wings on the market. This system gives you all the control of a boom, along with all the benefits of a centre strut.

You get improved control over the profile and luffing stability, plus a much more integrated connection to the wing itself through the Mini Boom. You can choose between aluminium or carbon booms, and one size fits all the wings.

Dihedral angles on wings are critical, the team spent a long time working out the best angle to offer the maximum stability when riding using the front handle. The canopy tension has been tuned to offer the maximum power with an absolute minimum of flutter. The window shape has also been refined to provide unrivalled visibility without making it larger than it needs to be.

The Duotone Slick has many riders impressed by the performance advantages, but why should you choose the Slick over the Duotone Echo or the Unit? The Slick is the versatile all-rounder in the range, being the most innovative and most advanced design out there. It is perfect for beginners and experts alike and is the go-to wing for most riders.

If you want a wing that can do it all, is forgiving and easy to fly, while being packed with the latest technology and a perfect blend between simple and elaborate, the Slick is the ideal choice for you.

The innovative Mini Boom on center strut design combines the best of both worlds in one wing – infinite hand placement and ease of handling for all types of freeride and freestyle moves, with neutral drift and floating ability of a strut wing for effortless surfing and downwinders. It gives the Foil Wing best ease of use with unlimited hand placements and highest level of performance. For takeoff power and efficient pumping of the wing, the rider has a stiff and strong connection to the wing.

A huge plus point of having a fixed boom in the Wing Foil is that it allows for fine control inputs as well as enabling to freely move the wing foil without the need to go reach for handles. The light weight boom also keeps the entire Wing in a state of tension wihch means it can be 'pumped' for light winds.

The Mini Boom is simply inserted into the webbing on the back of the strut and then pushed into the connection for the boom front, which is additionally secured by two retainer Velcro straps. Installing the Mini Boom only takes a few seconds and the inflation pressure guarantees a solid and intuitive handling sensation.

Moderate dihedral of the leading edge with a solid frame of front tube diameter and strut, plus finely tuned profile and canopy tension make the Slick powerful and incredibly efficient to get up and going, while also behaving really neutral and lightweight when depowered or held on the front handle on the wave or during downwinders.

Super helpful and an important safety benefit, whether you‘re cruising around in traffic or surfing swells downwind.

Shorter wing span plays a major role for the Slicks efficiency. The shorter span doesn’t only leave more room for maneuvers and wing rotations, the Slick can also be held more upright during flight and while pumping up onto the foil. This makes the Slick catch the wind more efficiently and ultimately lets you pump onto the foil and fly with a smaller wing.

Add stability in the canopy and reduce flattern and drag to a minimum and therefore improves the wind range. It assists the Foil Wing in his upwind ability, for safety and versatility and increase top-end.

The combined tension of the boom, battens and inflatable leading edge also fixes the geometry of the Foil Wing in a 'wing up' formation. This dihedral design helps keep the wing tips out of the water as well as provide a stable flight, particularly when transitioned above your head for tacking upwind and gybing downwind. The leading edge only requires just 6 PSI of air to inflate fully. 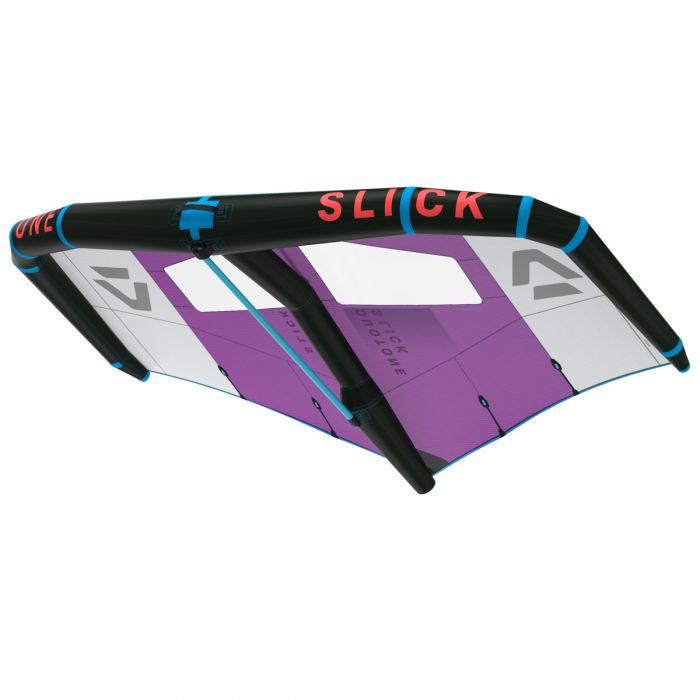 Skip to the beginning of the images gallery
SAVE 15%-16%